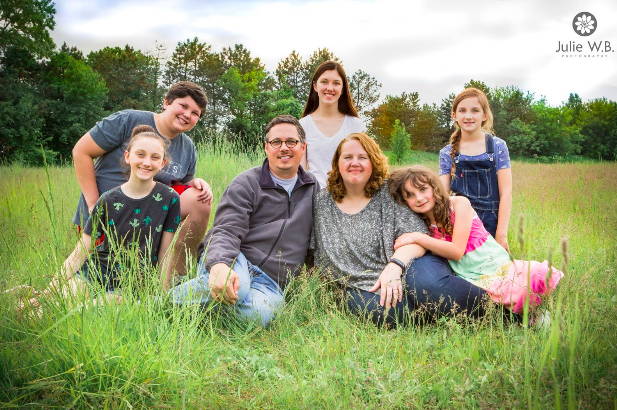 Kathy Regan knew something was wrong with her. She’d recently given birth to her fifth child, and she felt “off.”

(Because we know you wanna say it, we’ll say it for you: Um, of COURSE she felt “off.” Four kids plus a newborn! We’re exhausted just reading about it.)

Kathy had dealt with preeclampsia during her last two pregnancies, which meant her doctors had been watching her like a hawk for months on end. “I was always getting bloodwork and tests,” Kathy says. “Scans, ultrasounds. Nothing ever came up.”

So this Michigan mama went home without an explanation. She started a new job and began taking better care of herself -- eating healthy foods, getting more exercise and sleeping as much as humanly possible when there are five kids running around.

That’s when things got strange. Kathy was losing weight and getting fit, but her stomach was growing bigger. And she sure as hell wasn’t pregnant again. That ship had sailed.

After a host of doctor visits and referrals and unanswered questions (during which one ER doctor told Kathy she was probably going to die yet couldn’t explain what was wrong with her -- talk about some fantastic bedside manner) Kathy was slated for exploratory surgery.

That surgery was supposed to last just two hours. Instead, it took eight.

“I woke up, I looked at the time on the clock, and I knew I had cancer,” Kathy says.

She’d been cut from stem to stern (aka from her breastbone down to her pubic bone, aka a big-ass incision). That swelling in her stomach? You guessed it. A tumor. A very large tumor.

Kathy got “the call” from her doctor days later as she recovered at home. “He said, ‘I’m really sorry. You have appendix cancer. And you have a double-rare strain. I can’t treat you, anymore. I can’t help you.’”

Not exactly the kind of thing you want to hear when your torso has just been opened up and stapled back shut.

When the doctor said Kathy’s case was rare, he was not screwing around. There are only one or two cases of this kind of cancer diagnosed per million people per year. Of this already small number of patients, only .25 percent have the specific strain of appendix cancer Kathy has. Tumors grow on the outside of organs but inside the abdominal cavity.

“I laugh, because it’s like a bad social experiment.Like we’re on TV or something.”

“I still have my moments where I’m goingnuts, like, ‘I can’t believe all this crap I’mdealing with!’ And then I say, ‘Well... at leastI’m still here to deal with it.’”

(She’s graciously frank when discussing her situation, if you haven’t already noticed.)

Eventually, Kathy found a surgeon in Michigan who had experience treating appendix cancer. Who believed Kathy could someday see her cancer go into remission. It was decided Kathy would undergo chemotherapy and, afterward, another surgery. A surgery her previous doctor (the one who “didn’t know what to do” with Kathy’s case) described as “barbaric.” But it was their best chance at preventing recurrence, so Kathy was all in.

That “barbaric” surgery lasted 14 hours, during which, on top of scraping and cutting and cauterizing the tumor away, Kathy underwent what’s called hyperthermic intraperitoneal chemotherapy (aka “hot chemo,” which is way easier to pronounce). In layman’s terms, doctors pumped hot (like, 108* F hot) chemotherapy directly into her abdominal cavity.

In Kathy’s terms, “They sew you up around an intake and outtake tube, and they pump hot chemo in you for 90 minutes.”

In addition to her more traditional IV and oral chemotherapy treatments, Kathy will likely have to undergo this “hot chemo” surgery again in the future to keep the cancer at bay. She’s already done it twice, now. Over the course of the past four years, Kathy has lost her spleen; parts of her diaphragm; part of her liver; her ovaries, tubes, uterus and cervix; her appendix; her omentum; parts of her bowel; and the lining of her abdomen to this disease.

Despite all this, for a hot second (see what we did there?), things were going okay for the Regans. Until Kathy's husband, Dave, lost his job of eight years with no warning and no severance pay. Currently, Dave is supporting his family of seven on an $11-an-hour salary. They aren't ashamed of this, because they know they aren't the only ones living off so little, but it definitely makes it tough. Dave is currently in school for job retraining in a higher-paying field, as is Kathy (you know, when she's not DEALING WITH CANCER).

But wait, there's more. Last month, the Regans found out their landlord was putting the house the family had been renting for the past six years on the market. With no warning. They had about a month to vacate the home.

Oh, and did we mention Kathy was about to begin her 50th round of traditional chemo treatment?

“I laugh, because it’s like a bad social experiment,” Kathy says. “Like we’re on TV or something."

Because her cancer is so rare, doctors can’t give Kathy a prognosis. Can’t give her a timeline. Can’t tell her what to expect. And Kathy is a plan-everything-in-advance, put-everything-in-a-spreadsheet kind of woman. So it's been an adjustment. Especially with the whole “find a new place for your family of seven to live in the next 30-some days” situation. Still, Kathy manages to see the positives. Because that’s who she is.

Your support this month will help Kathy and the rest of the Regan family as they settle into a new rental home. It’ll help extend Dave’s $11-an-hour salary. It’ll help keep this Michigan mother of five going.

SHOP TO SUPPORT KATHY
MEET OUR PAST HEROES