Andi Emmett was just a few credits shy of college graduation when her life changed forever.

Yes, we know this is a tired cliché, because aren’t all of our Heroes’ lives forever changed? That’s kind of why Still Kickin exists in the first place. Something awful happens -- an event, an illness, a death -- that flips a person’s world upside down.

Before we continue, a note: Andi’s story includes domestic abuse, gun violence and suicide; please feel free to scroll down to the end of the piece if any of these are difficult subjects for you.

Andi had been living at home with her mom and step-dad throughout college, in part to save money (because we all know tuition doesn’t come cheap) and in part to help take care of her 7-year-old sister, who has autism.

March 25, 2016 was Good Friday. Andi commuted to campus as usual, attended her classes, completed that week’s internship hours, and finished up the day at a local church service. Typical stuff, right?

But when Andi returned home to her basement bedroom, she heard a commotion upstairs. “I could hear things falling -- like things were being knocked over,” she says.

Andi’s mother came downstairs and explained the situation: Andi’s step-dad was drunk again. An unfortunately regular occurrence -- Andi had learned over the years to stay away from the abuse as much as possible.

On the evening of March 25, however, Andi followed her mom back upstairs. To listen out. To make sure her mom was going to be okay. When she glanced down the hallway to see what was going on, Andi saw her step-dad pulling her mother into their bedroom.

At this, Andi spoke up, telling him, “You need to let go of my mom and go to sleep.”Her step-dad was, in Andi’s words, a gun fanatic. “Obsessive, almost,” she adds. “With the military, with ammo…” 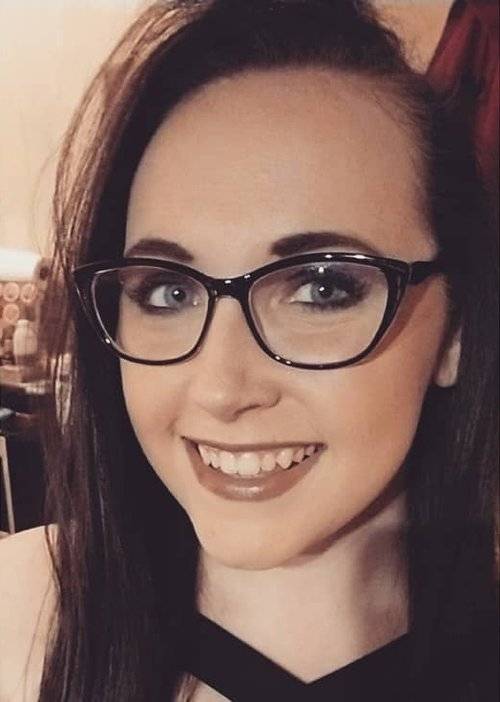 So she recognized the sound of a gun was being cocked. Andi just didn’t expect to hear it right then, in that moment, as she turned her back to return downstairs to her basement bedroom.

“It made me stop in my tracks,” Andi says. “Did I really just hear what I thought I just heard? A split second later, I heard my mom say, ‘Run, Andrea!’”

She did, but the front door was locked, and she knew there wasn’t time to undo the bolts. So Andi ran into her basement bedroom (locking the door behind her) and into the garage. By the time Andi slid under the still-opening garage door, her step-dad had kicked down the basement door and was chasing after her.

That's when he unloaded his gun -- six rounds in all.

It was dark, so Andi hid behind a tree as her mom tugged on her husband’s shirt, begging him to stop. At one point, Andi's step-dad threatened to shoot his wife, too. Andi contemplated calling 911 but worried the light of her phone would alert him to her hiding spot. It didn’t matter; several neighbors had already called the police. Her step-dad was arrested. And Andi was miraculously unharmed -- physically, at least.

“I just did what I had to do for my family to keep us afloat and together.”

At this point during our chat, Andi pauses. Then, she says something so outrageously cool and casual that we don’t know if we should laugh along with her or Hulk smash something on her behalf:

A few days after her step-dad’s arrest, Andi’s mom was admitted to a psychiatric facility. She’d already been struggling with depression for many years and had endured domestic abuse; the shooting and its aftermath was too much for her to handle.

During her mother’s psychiatric stay, Andi stayed home to care for her 7-year-old sister. This meant missing class. Missing her internship hours. And reality quickly set in. Her step-dad was in jail awaiting trial, which meant there was no money coming in. Andi’s mom had been insured through her husband's job, so a month after his arrest, she lost her health care coverage. She applied for disability assistance for her mental illness but was denied.

So at 23 years old, Andi became the head of the house. She started nannying full-time and took other babysitting jobs on the side. When her mother’s condition worsened, Andi checked her into another psychiatric facility and turned to a local food pantry while she waited for the family’s food assistance to kick in.

"I just did what I had to do for my family to keep us afloat and together," Andi says.

In April 2017, Andi’s step-dad was sentenced to 10 years in prison followed by 10 years of probation, and Andi felt like she could finally breathe for the first time in over a year. The story made the local news -- a few hundred words detailing the night of the shooting and the case against her step-dad.

However, this isn’t where Andi’s story ends. Later that summer, Andi’s older sister moved back home to Georgia with her husband and kids. Andi’s sister and her mother were very close, so the move was a welcome, happy change for everyone.

But this family could not. catch. an effing. break. Two weeks after the move, Andi’s sister died by suicide. Her death shocked everyone.

“I never labeled myself as [brave] until I heard it from other people.”

“I took a week off from work,” Andi says, “But I was stressed about bills. Even missing one day of nannying was detrimental -- every day counted.”

And because time flies when everything is falling apart, Andi found herself still financially supporting her family months later, at 25 years old. Something had to change; she was burning out. And something the judge said to her at her step-dad’s sentencing had stayed with her during those many difficult months. "He made a point to turn to me and say, ‘You’ve done a lot for your family. And now you need to start living your own life,’” Andi says.

So that’s what she’s doing.

Scrolled ahead to the end? You've found the right place!

Andi recently moved out of her mom’s house. She was reluctant about it at first, but her mom supported her in the decision, and other family members have started helping out Andi's mother and young sister financially as well.

There's no doubt in our minds that Andi is brave as heck. She doesn't always see it that way, though.

“He made a point to turn to me and say, ‘You’ve done a lot for your family. And now you need to start living your own life.’”

"Looking back on all I have made it through, I realize now the bravery I had during all of it," she says. "But it's still kind of unbelievable. I never labeled myself as [brave] until I heard it from other people. It still feels a little weird."

Well, we're sorry for the weirdness, Andi, but you're brave. Full stop.

This young woman deserves a fresh start. And that's where Still Kickin comes in. Your support this month will help Andi as she branches out on her own. As she regains the independence she lost these past few years. As she moves on from the events of March 25, 2016.

When asked what she would tell her 23-year-old self if she could go back in time, Andi replied: "I would tell myself that I am much more resilient and hard-working than I ever realized."

We’re in your corner, Andi.

SHOP TO SUPPORT THIS MONTH'S HERO
MEET OUR PAST HEROES