Nick Kesler’s story involves an Axel Rose-inspired wig, a trip to Bozeman, Montana and one of the best home improvement TV shows of all time.

It also includes a side of cancer. Decidedly less fun.

Nick had been getting sick every couple of weeks for about a year, which he’d been attributing to allergies. Because haven’t we all gone to the doctor feeling like total trash only to hear that “it’s just allergies” and nothing can be done? Plus, Nick is a single dad to two little kiddos, which -- surprise! -- sucks a lot of energy out of a person.

So the man was feeling run down and “generally just awful” but still not totally concerned. Until he took a bathroom break after wrapping a film shoot and urinated blood.

And you don’t need to be a medical expert to know that’s less than ideal. 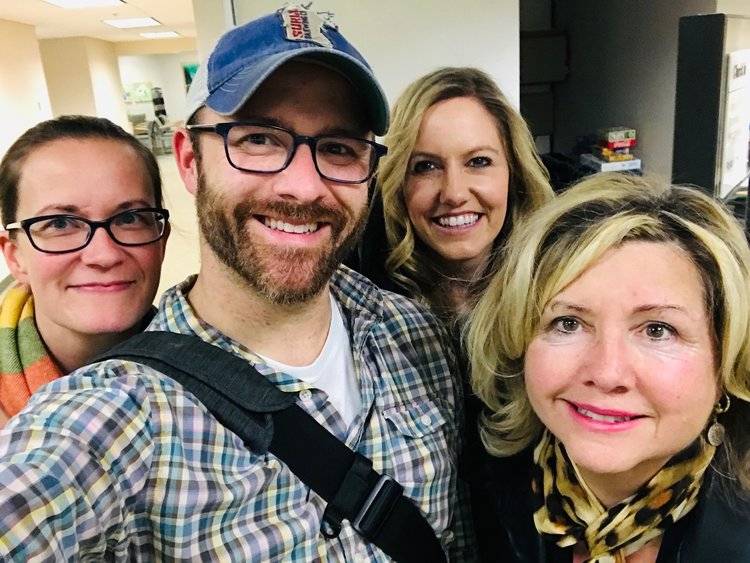 You know a dude is a good dude when his ex-wife, his girlfriend and his mother take a smiling selfie with him after his first oncology meeting. 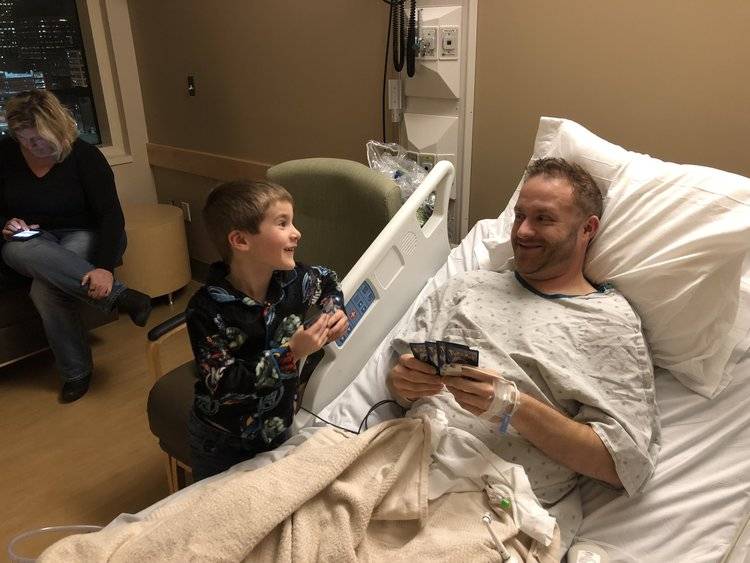 Nick's son visits him after surgery to remove his kidney (and the tumor that, you know, had attached itself to it).

Nick went home and Googled his symptoms, and naturally, “all roads led to cancer.” He paid a visit to his doctor, who ultimately suggested Nick get a (very expensive) scan to see what was happening up in there.

And you can probably guess what’s coming next.“They did my scan in the morning and said they’d call me in a day or two,” Nick says. “But they called me later that same day -- ‘Yeahhhh, we want you to come in and talk to the doctor right away.’ And I mean, we’ve seen movies. We know how that goes.”

We do, indeed.Nick had a cancerous mass on one of his kidneys. A mass that could be either one of two more common tumors or a very rare tumor that’s almost never found in adults.

Yes, this is our not-so-subtle way of foreshadowing.

Sure enough, Nick’s mass was a Wilms’ tumor, which makes Nick a pretty special guy, because these tumors are usually only found in children; his doctor told him only a few hundred adults have ever been diagnosed with this kind of tumor. Ever. Like, in the history of time.

And this is the part of Nick’s story where we step into our handy dandy time machine and go back to that trip to Montana we mentioned earlier. A year prior to that whole urinating blood situation, Nick was working on a DIY network television show called “Bath Crashers” as a videographer. (EDITOR'S NOTE: That show was THE BEST, and it’s a travesty that it’s no longer on the air, but we digress.)

While taping an episode of the show in Bozeman, the “Bath Crashers” team met a man whose daughter had recently been diagnosed with cancer. None of the recommended treatments were helping her, so the father had started researching her case on his own. The man discovered his daughter’s cancer was a rare Wilms’ tumor and therefore required a different treatment plan. He took his discovery to his daughter’s care team, they implemented that new plan, and she started getting better!

So one day, more than a year later, the “Bath Crashers” team is hanging out at Nick’s house, talking about his crappy cancer, and Nick mentions he has a very rare kind of tumor called a Wilms’ tumor.

And the universe implodes. 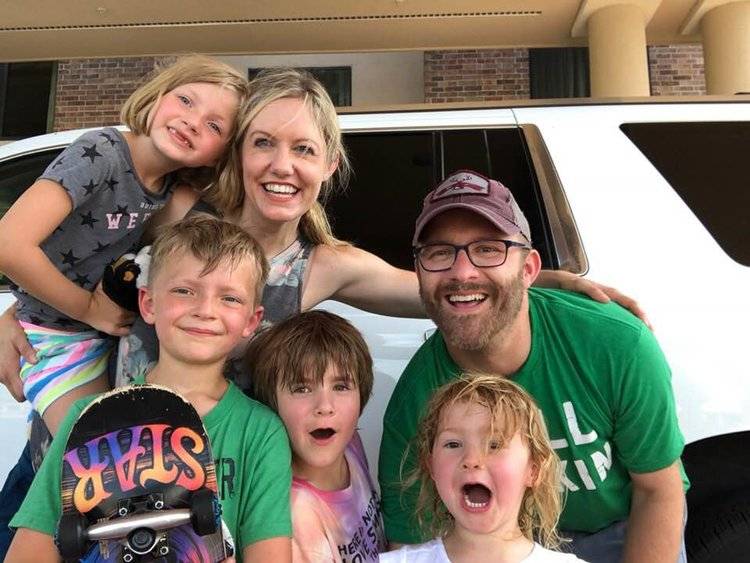 Nick, his girlfriend, Arleigh, and their kiddos embark on a 4th of July road trip.

“One of the guys was like, ‘DUDE, dude, dude. Wait a second. Wait, wait, wait. Remember when I told you about the whole story of the Bozeman guy with the daughter and the cancer?’ And I was like, ‘Yeah…’ And he said, ‘The tumor. She had a Wilms’ tumor!’”

Basically, what we’re trying to say is that an episode of “Bath Crashers” saved Nick’s life. (No, this statement has not been approved by the FDA.) “What are the odds that I have one degree of separation from this guy? It couldn’t have been better,” he says. 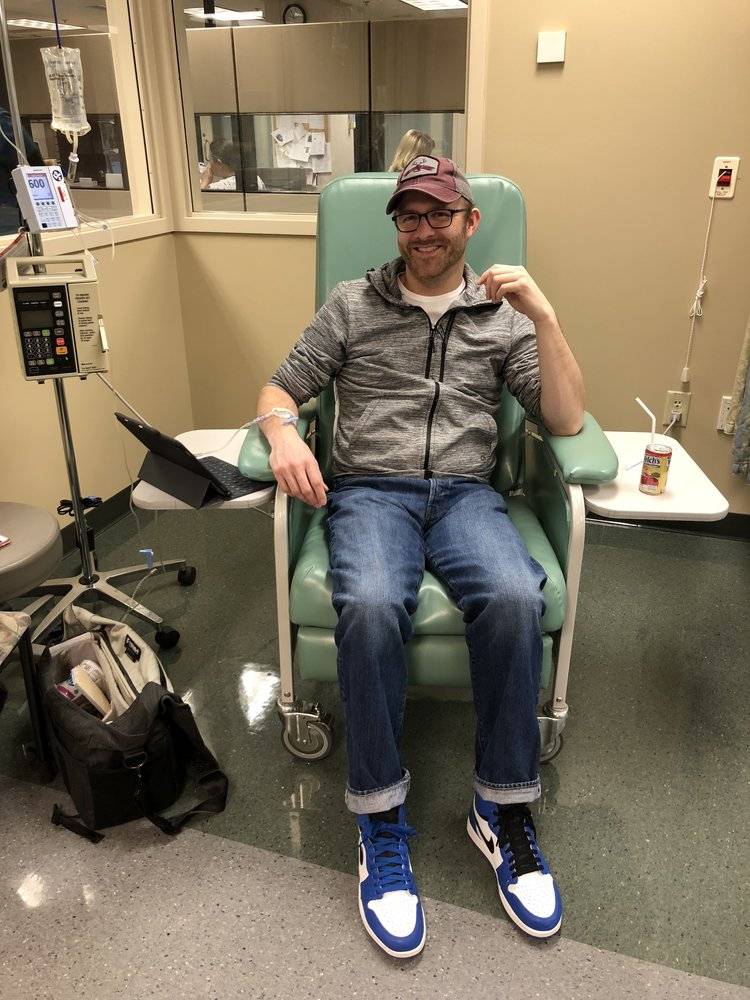 Nick captioned this photo "more chemo fun!" because of course.

Nick is now less one kidney (and less one tumor). He recently finished his latest round of chemotherapy and somehow still has a significant percentage of his hair. Which is kind of a shame, since he’d already picked out the perfect Axel Rose-inspired wig for the occasion. And that’s just one example of this guy’s endlessly positive attitude.

“I don’t know if it’s a zen thing,” Nick says. “But I was in a place where, when they were like, ‘You’re gonna have chemo and radiation,’ I was able to be like, ‘Wow! I’ve never had chemo before. Let’s do this! I’ll try anything once. Right on.’”

Nick is feeling pretty good these days, but he will have to undergo (super expensive) regular scans and tests to make sure his super rare tumor stays super gone for as long as possible (forever, ideally). And when you’re a freelance filmmaker with two kids, those bills add up super quickly. Your support this month will help Nick with those.

And though we can tell you this dude’s prognosis is looking pretty good, we’re going to leave it at that, because that’s how Nick prefers to approach his disease.

“Several years ago, I was reading a book by Augusten Burroughs, and he talked about how his partner had cancer, and he said, ‘If you ever experience this, no matter what you do, do not pre-pay the disease,’” Nick says. “You don’t pre-pay your electric bill, so don’t pre-pay the damn disease. Because you don’t know what’s really going to happen. And why would you piss away your great time?

"I remember reading that and putting it in my toolbox in case I ever needed that one.”

We hope Nick doesn’t mind if we put that in our own toolboxes, as well.

You can support this awesome guy this month by making a donation, buying some fun summer merch, or coming to our big birthday party later this month at Bauhaus in NE Minneapolis. Nick plans to be there in his good-natured glory (sans the Axel Rose wig).

“I’m so lucky to have gotten cancer,” he says. “For real,” he adds when we give him a look that says something along the lines of are you effing kidding.

“I’ll be at a wake for a friend’s dad or a relative of mine, and you hear all these great stories, and everybody’s together and talking about how much they love and appreciate the person, and it’s like, ‘Wow, this is so great. Why don’t we do this for people when they’re alive?’ I got all the benefits of being dead and having a wake without having to die.”

SHOP TO SUPPORT NICK
MEET OUR PAST HEROES